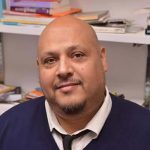 José Casas (Teaching Artist) is a playwright and Assistant Professor who heads the Playwriting Minor in the Department of Theatre & Drama at the University of Michigan. He is a member of the Dramatists Guild as well as a board member of Children’s Theatre Foundation of America. He has a B.A. in Theatre Arts from the University of California, Santa Barbara, a M.A. in Theatre Arts from California State University, Los Angeles, a M.F.A. in Playwriting from Arizona State, and two years of graduate coursework in Drama and Theatre for Youth and Communities (DTYC) at the University of Texas at Austin.

His plays include la rosa grows beyond the wall, all brown all chingon, aDoBe, a million whispers all at once, the vine, la ofrenda and somebody’s children, Flint, 14, and Palabras del Cielo: An Exploration of Latina/o Theatre for Young Audiences. His work has been included in a number of anthologies, including The Bully Plays, Ethnodrama: An Anthology of Reality Theatre, and Theatre for Youth II: More Plays With Mature Themes. His plays, la ofrenda and somebody’s children were awarded both the Bonderman National Playwriting Award and the American Alliance of Theatre and Education’s Distinguished Play Award.

His book, Palabras del Cielo: An Exploration of Latina/o Theatre for Young Audiences was awarded the American Alliance of Theatre and Education’s Distinguished Book Award. Currently, he is working on the 2nd volume of Palabras del Cielo as well as the book, Every Great Dream: Visioning African American Theatre for Young Audiences. Both books will be published by Dramatic Publishing.