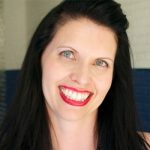 For the past 20 years, Jenny Nelson has anchored her entire career to working with young people through the art of live theater. She received her bachelor’s degree in theater, a master’s degree in theater from the University of Arizona, and a second master’s degree in education from Fairfield University. Jenny enjoys being a theater educator for all ages, from kindergarten to graduate school. She bring a wealth of experience as both a performer and educator in the traditional and non-traditional classroom.

For the last 15 years, Jenny has focused on social justice theater. Skilled in Theatre of the Oppressed and multiple anti-racist/bystander trainings, Jenny believes that theater has a responsibility to reflect society and pose thought-provoking questions to encourage a dialogue with the community.

She currently acts as Associate Artistic Director of Collective Consciousness Theater (CCT), a social justice theater company in New Haven, CT. At CCT, Jenny has directed numerous productions that include mostly new plays written by playwrights of color and women.

She has taught at several universities, including City College of New York in the Graduate Program for Theatre Professionals and Educators. She has also worked as an artist and educator at several theaters, including Long Wharf Theatre, The Shubert Theatre, and Yale Repertory. Recently, Jenny was a nominee for The Tony Teaching Award of Excellence. Jenny is also an accomplished pianist and songwriter as well as a professional director. Selected past directing credits include Pass Over, The Royale, Sunset Baby, Milk Like Sugar, We Are Proud to Present…, and Gidion’s Knot.

“It continues to be the joy of my life to work with young artists. I have been so fortunate to bear witness to the transformative power of theater in the classroom and on the stage. Theater has the capacity to change hearts and minds, but social justice theater has the ability to change the system itself.”