A parable (par·​a·​ble | \ ˈper-ə-bəl), according to Merriam-Webster, is “a usually short fictitious story that illustrates a moral attitude or a religious principle.”

Sister Aloysius, a school principal with a mandate to uphold tradition, is certain something’s terribly wrong about the relationship between a young parish priest and a troubled boy. But beneath her moral crusade to reveal the horrible truth lies a chasm of doubt, where the choices we make can reverberate beyond our imagining.

We hope that this riveting, dramatic play starts conversations across generations, across faiths, and invites all those in our community to engage with us. Winner of the 2005 Pulitzer Prize for Drama and the Tony Award for Best Play.

Check out video from the show »

View the digital program Download our study guide for educators

Check out the official trailer

David Kennedy is the Associate Artistic Director at Westport Country Playhouse and the director of our production of Doubt. He spoke with our Director of Education Jenny Nelson about why this play, why now, and why what lies beneath the surface is often more important than we think.

Jenny Nelson: Why did the Playhouse select this play?

David Kennedy:  Mark [Playhouse Artistic Director Mark Lamos] was talking to a friend of his who’d seen a production of Doubt recently and remarked on what an experience it was for the audience, how thrilling a night of theatre it was, and how much dialogue it provoked. So, he quickly re-read it and then recommended I do the same. I knew the play, of course, but had never actually seen it. I was bowled over by how fresh it seemed. The issues that Shanley explores — what it means to live in a society of extreme confrontation and advocacy that leaves little space for nuance, self-questioning, or doubt—are even more relevant today than 16 years ago. Mark felt strongly that we had to do it, and I felt the same.

JN:  What is a director’s concept?

DK:  A concept is a word for the director’s point of view. The director intuits what the story of the play is about and how that can and will be expressed using all the production elements — scenery, costumes, light, sound, staging, acting choices, etc.

A director spends a lot of time thinking about how each choice will impact an audience’s experience and understanding of the play. The purpose of all of those choices is to reveal a point of view. But it’s an extremely collaborative process. Ultimately, it’s the director’s job to interpret the play and the designers sort of interpret the director’s interpretation, which is always exciting.

JN:  What is your concept for this production?

DK:  We took the idea of a parable (Shanley’s full title for the play is Doubt: A Parable) as the starting point. What is a parable? The dictionary says it’s a simple story used to illustrate a moral or spiritual lesson. That’s one way of looking at a parable. Another comes from Franz Kafka, a writer I love, for whom a parable must contain an irresolvable paradox. It can be a small story which seems as if it wants to point its way to a moral lesson, but whose lesson is obscured or even incomprehensible. A riddle of sorts.

I think this play might be described according to both of those definitions. But one thing that’s true regardless of the definition is that the purpose of a parable is to point to something else. The simple story is not to be understood solely as what it is, but you look through it to its larger implications. Jesus was always doing this in the gospels, which
is clearly why Shanley chose the word.

So we asked ourselves: How do we make a production that both tells the story, but also reveals something else behind the story? We knew right away that at the very least that meant dispensing with a realistic approach. We needed to reveal the actor as a storyteller, call attention to the story being told as a deliberate act, strip away realistic surfaces, etc., all so audiences would remember that they’re in a theatre watching actors enact a story. The rest of the choices we made flowed from that one idea.

JN:  Were there any particular current events, books, music, etc. that inspired your concept?

DK:  My influences on this production were rather disparate, but among the most important were Lars von Trier’s 2002 film Dogville, which inspired the idea that a parable can be told in the most bare bones way. And there’s an extraordinary installation by the sculptor Robert Gober called Untitled (1995–1997) that depicts the Virgin Mary with a large sewer pipe running through the middle of her torso. It’s the most remarkable mixture of the sacred and the profane, which of course I felt was something we had to bring to this play since it’s a religious parable that’s
also ultimately about our secular world.

And finally, Our Fathers, David France’s first-rate account of the sex abuse scandal in the Catholic Church, was instrumental in helping me understand the culture and psychology of the Church in the mid 1960s, when the play takes place.

JN:  How does the production design (set, costumes, sound and lighting) play a role in supporting your concept?

DK: The language of design is among the most important elements in bringing the vision of the play to life. Whether there are realistic environs, walls and doors and such, or as in this production simply a platform suspended in an empty theatre, scenic design does much of the work to situate the production, convey its meaning. Same with the clothes, lights, and sound. It’s almost always design that brings a production concept to life.

DK:  Enjoy the uncertainty of it. Shanley is very crafty about how little he gives the audience to hold onto. That’s by design. That doesn’t mean you won’t have opinions after you’ve seen it — you’ll definitely have opinions — but know that, as Shanley says in the published introduction to the play: “There is no last word.”

Join us for a series of four facilitated audience discussions on topics presented in the play, in the theater after the performance.
Learn More 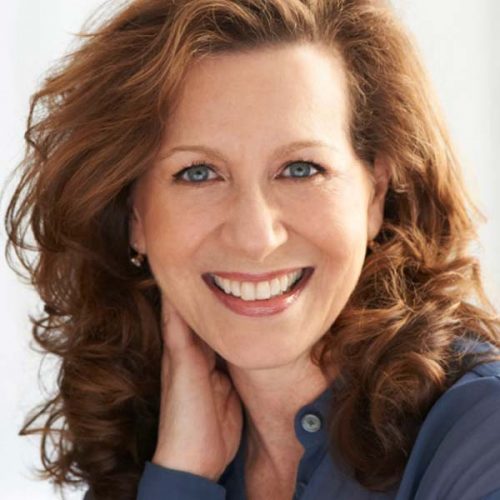 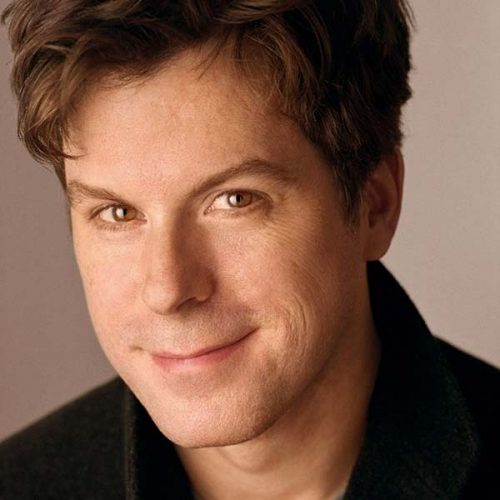 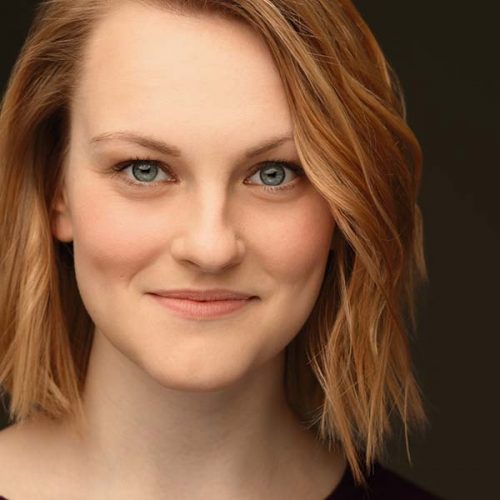 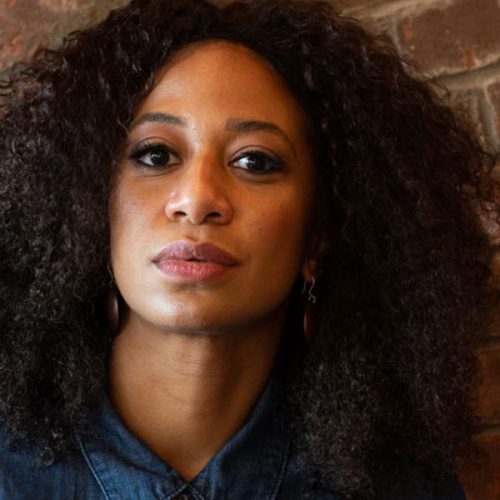 …complex issues and implications are presented through well-orchestrated dialogues.

…a very solid company of actors.

I on the Valley

John Patrick Stanley has written quite a play in “Doubt,” full of potent incidents and events, and it is high praise to say that Westport Country Playhouse does complete justice to this work.  This production of “Doubt” is definitely one show that will stay with you long after the play has ended. 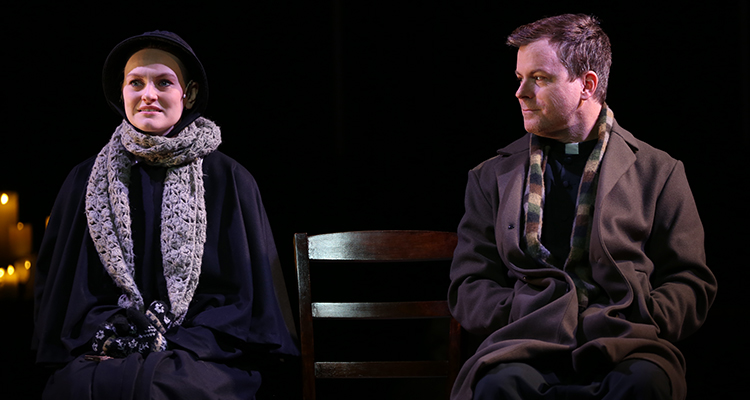 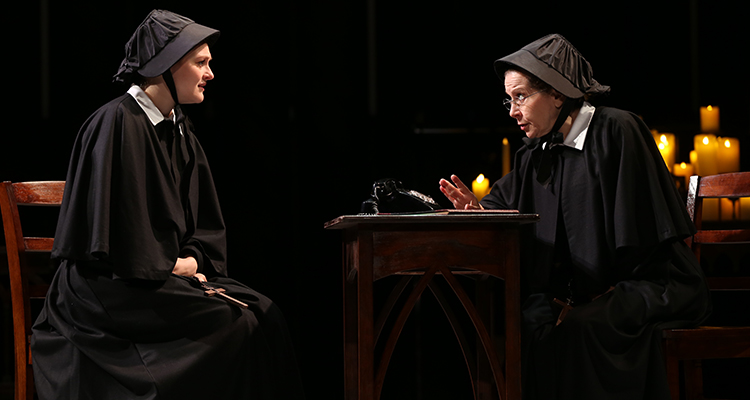 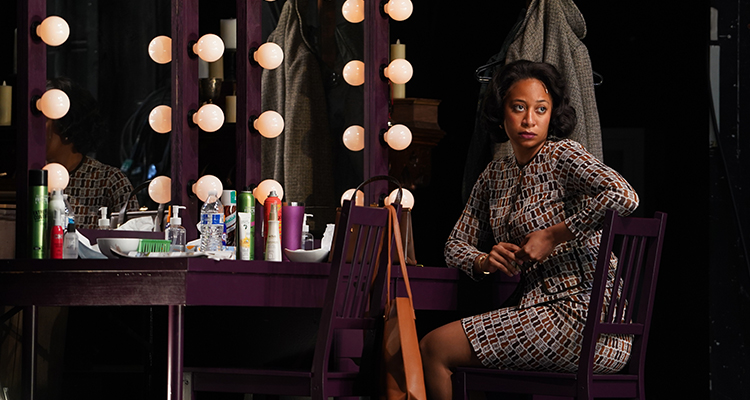 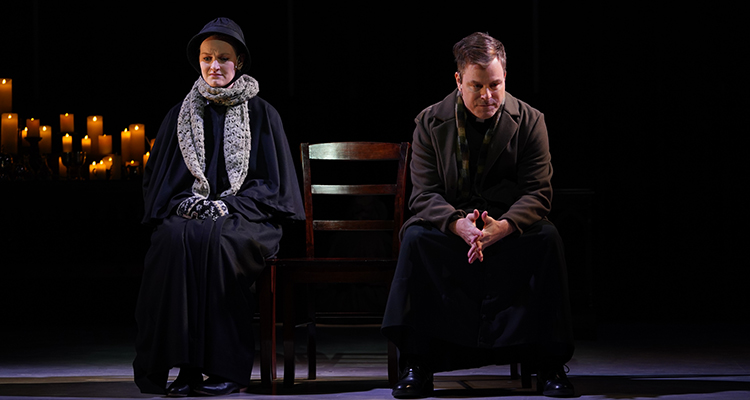 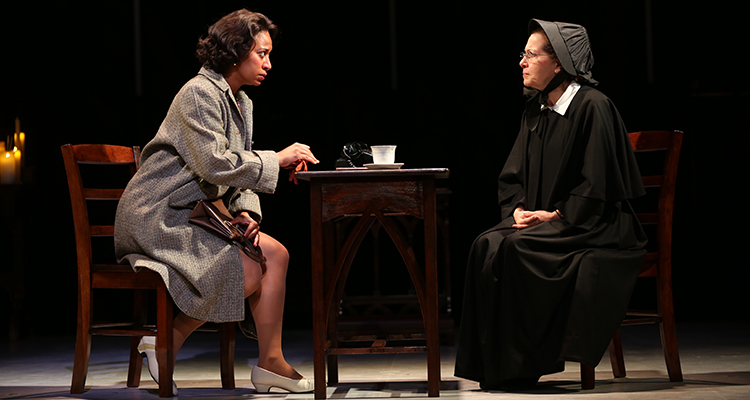 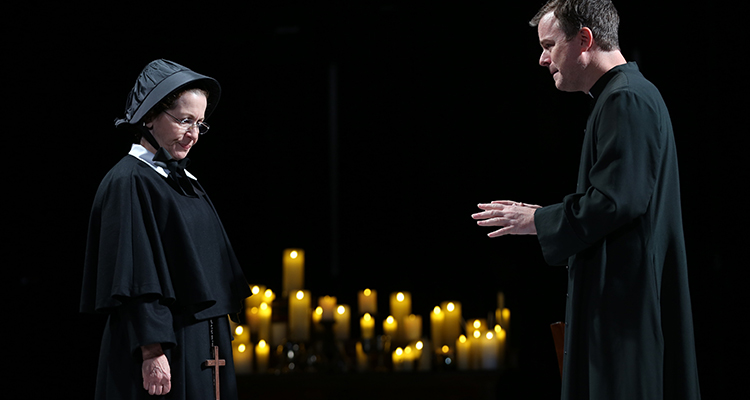 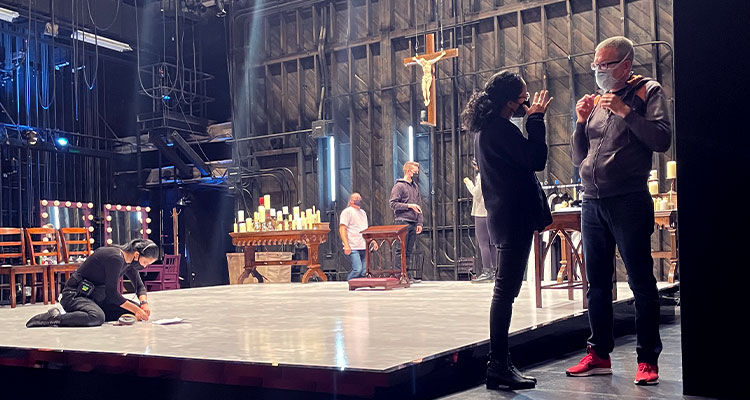 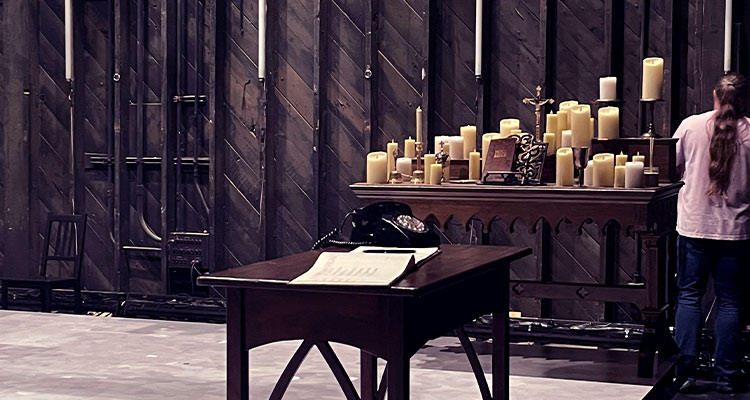 These tables were actually custom built to resemble neo-Gothic furniture. 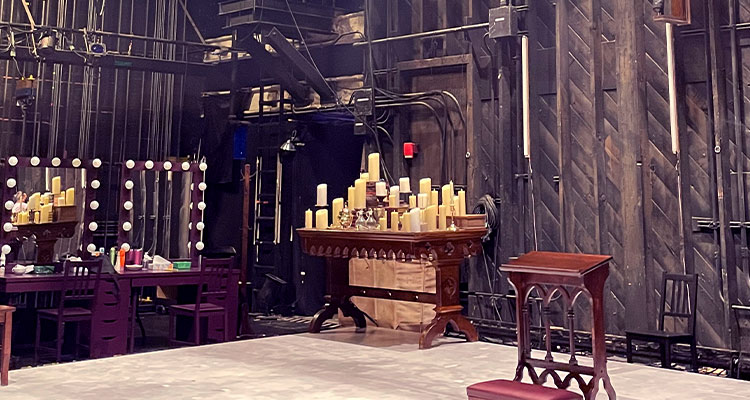 All 100 of these flameless candles were individually re-wired to be controlled by our light board! 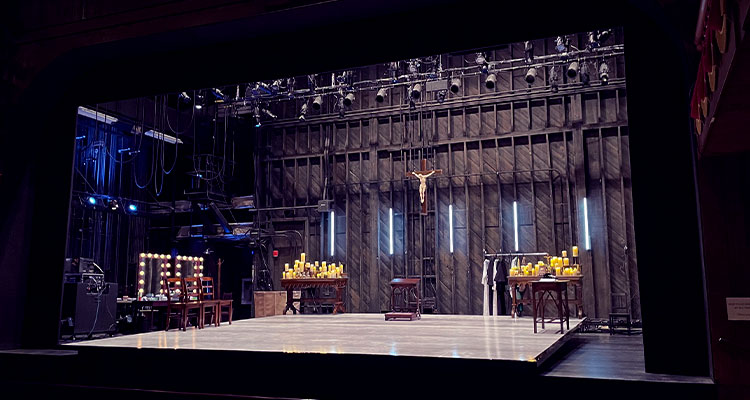 A view from the house during tech. 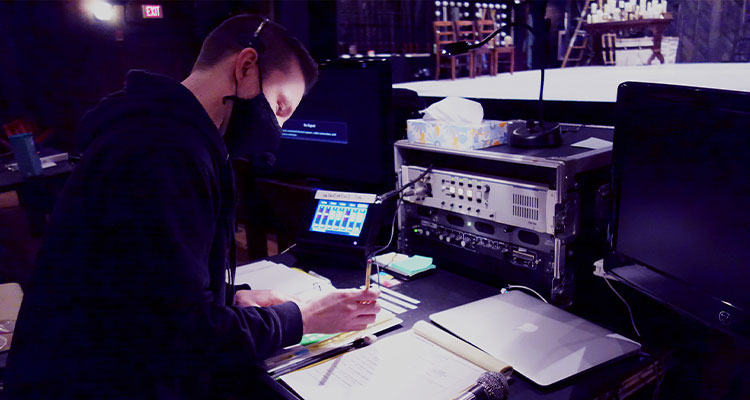 All production photos by Carol Rosegg.

To attend in-person performances, all audience members must present proof of vaccination and wear a mask at all times while inside. Please review our full safety protocols here.

For the production of Doubt: A Parable, the Playhouse has implemented distanced seating for Wednesday matinee and evening performances. There will be at least two open seats between parties in both the orchestra and mezzanine sections of the theater. When purchasing tickets online, seats will be sold in pairs. Please contact the box office with any other requests or special seating requirements.

Pay What You Will

As a thank you to our community, our Wednesday evening performances now include the option to pay what you will when purchasing tickets (minimum ticket price of $5).

The Playhouse 2021 season is generously supported by the Eunice and David Bigelow Foundation.

This production of Doubt: A Parable is sponsored by the Eunice and David Bigelow Foundation and Judy and Scott Phares. Additional support is provided by the Burry Fredrik Foundation.

Media sponsorship for the 2021 season is generously provided by WSHU Public Radio and Moffly Media.