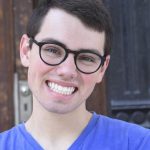 Before founding Egg & Spoon Theatre Collective in 2017, Liam (he/him) received his BFA from Syracuse University, where he was the Managing Director of Black Box Players while directing and assisting on numerous productions. Most recently he co-directed The Rats and directed The Killer for Egg & Spoon’s second season. Other assisting credits include Fiorello! (Off-Broadway, dir. Bob Moss); In the Heights (dir. Marcos Santana); Man of La Mancha (dir. Mark Lamos); and Thousand Pines (dir. Austin Pendleton). He is currently the Assistant Artistic Director at Westport Country Playhouse, and an Associate Member of the Stage Directors and Choreographers Society.